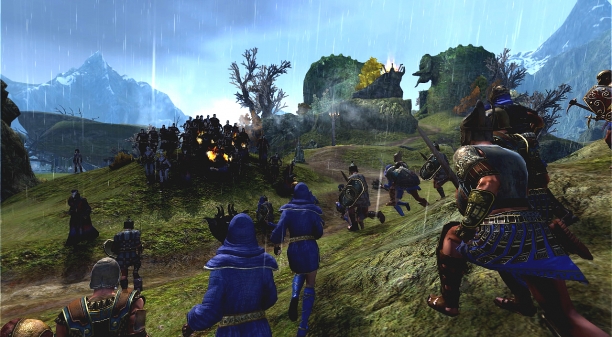 Hi, this is Lead Content Designer Matthew Bennett. I want to tell you about the huge PvP update for Age of Conan which is going live next week!

Age of Conan is celebrating its 6th anniversary in a few days. Many games are not able to ever celebrate such a feat and we must pay homage to and thank our great community for that.

But this 6th birthday is not just some annual milestone we want to mark with a few fireworks and some ale, we want to celebrate the brutal world of Hyboria by releasing a fresh anniversary event (you can read more about that next week) and arguably our largest PvP patch in the game's history.

Our brutal friends from the west, the Pictish savages, have descended from their wildlands in droves and are intent on turning Hyboria into their stage of battle once more.

On a monthly basis the adventurers of Hyboria will be tasked to pay homage to the Pictish God's Gullah and Jhil, spill blood in their names and help lift a curse set upon them by the spirits of Ancient Acheron.

Ok, now let's get into the details of this open world 'festival' of PvP – The Festival of Bloodshed!

For one week every month (by default the week commencing on the 3rd Wednesday of the month) a location in Hyboria will become the theater for a Festival of PvP.

On our PvP servers (Fury and Rage) these events will cycle between iconic open-world zones. These zones have been carefully picked with help from the community to support the best open-world PvP experience amid Hyboria's rugged and beautiful world.

On our dedicated PvE server (Crom) this festival will take place in the Border Kingdoms, an area permanently flagged for PvP, so that PvP on this server remains completely consensual.

When a PvP Festival starts, the Border Kingdoms on Crom or the one of the chosen zones on Fury/Rage will become host to a number of brand new PvP events. The zone will cycle through the events and will have a short downtime between each.

There are four types of events:

Our first event is reminiscent of a King of the Hill game mode. Each of our possible festival zones has 6 carefully chosen locations which can become fields of slaughter.

Players will then fight for control of one of these points. Every 30 seconds the current owning team will have their score incremented and when the event ends, the team with the highest overall score will have their names broadcast to the zone and declared to be the winners.

However to ensure that no team should ever get an unassailable lead the team holding the point at the end of the timer will receive a large boost to their score and an additional reward.

This event is intended for teams of 6 (though nothing prevents smaller teams or solo players from participating and having a major impact on the outcome, one well placed combo or arrow can easily throw out one group's dominance).

The Arenas of Death are split into two events, a solo free-for-all deathmatch and a team based deathmatch. Each festival location has two very different arenas which will play host to these events. The open world structure of each of these arenas will lead to very different dynamics based on the location.

The rules for the arena are simple, the player/team scoring the most kills within the confines of the arena is declared the winner, and don't try to flee because your death will still be counted if you do.

Of course in war it is inevitable that not all classes are equal all of the time and therefore the winners are determined on an archetype basis. Players coming in second and third also have the honour of having their names broadcast and receive lesser rewards. In the team arena the winning archetypes on the highest scoring team receive the same honour, creating competition within the teams themselves.

Again these events are open to all comers.

The Chosen of Gullah

The fourth and final event (on release) is the Chosen of Gullah, it works similarly to Juggernaut or Predator modes in other games.

When this event starts a random active player in the zone will receive a buff effect greatly increasing their stats and essentially making them a player controlled open-world boss. This effect will last for a maximum of 3minutes or until the player is killed, however during that time the player will accumulate a score based on how many PvP kills they can rack up.

We resisted the temptation of having this buff transfer to any player able to kill 'the Chosen', instead when the effect expires a new random active player will receive the buff. This means the event will move around the zone naturally and every player has an equal chance of experiencing this enhanced game-play. Of course the feat of slaying 'the chosen' does not go unrewarded and any player able to do so gets a large boost to their own score.

When the event timer expires the player with the highest score has their name and victory broadcast.

All the events are backed up by a large selection of quests which reward players for participating (whether they win or not). Rewards will come in the form of large PvP progression boosts both in terms of PvP rank and XP for our Alternate Advancement system, along with token drops for the purchasing of unique PvP armour sets, weapons, accessories and recently updated social items.

Additionally every player who has their name broadcast as a winner will accumulate victory tokens which will give access to unique vanity rewards. More rewards will be added over time from this new vendor. Such rewards will initially include a companion who will taunt other players based on their PvP deaths, an axe man who might throw his weapons at others, the ability to summon carrion to feast on your dead foes and a certain Cimmerian female assassin.

Along with the festival we are introducing a Daily PvP questing system. With this system we wish to reignite open-world confrontations across Hyboria. On release these new daily quests will be limited to the PvP servers but will be made available on our PvE server during the festival week.

The quests include a bounty quest to track and assassinate another random player within the zone, a quest to intercept packages carried by other players attempting to deliver them without the use of mounts or stealth across the zone and its counter to successfully deliver said packages without dying.

Our world boss system has proven that our tech is capable of handling a mass influx of players onto the same part of the map. However, I would still recommend that those wishing to participate in these events switch their settings to Raid and PvP, disabled particles and remove floating damage numbers in order to experience the most optimal gameplay.

Really the PvP festival is just the pinnacle of improvements we have been making to PvP in Hyboria over recent months. Our entire PvP itemization has received a complete overhaul and the difference between the different tiers of PvP gear has been greatly reduced while the whole PvP gear system has been improved to stand parallel with the best gear from PvE.

What this means is with just the PvP starter set a character can be instantly be very competitive within all our existing and new PvP game features.

We are really looking forward to seeing how these events will play out and all the unique stories the players will create with this open-world system. A great thing is that these events will take place in existing open-world zones and will offer total agency to players on how they use the surroundings to their advantage and make use of the event setup. We are also really excited by the prospect of the events acting as catalysts for spontaneous open-world PvP throughout the whole focused week and re-spark old guild and player rivalries.