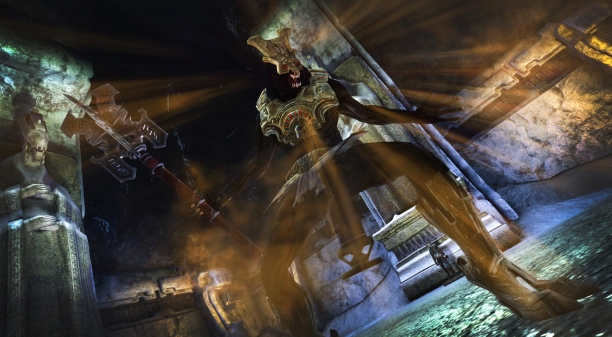 Spring has come to the lands of the north, and we’ve been doing our best to get through the yearly battle with allergies, Easter and raging bee attacks. But though spring might be coming, players will be returning to the frozen wastes of the north to hunt down and kill the next of the Twelve Portents.

Our next world event boss will go live on the 7th of May – this time you’ll be facing off against a familiar foe with a range of new moves.

As mentioned during the last Game Director Letter, the team is also hard at work on Patch 4.2, which we are targeting for a May release date. This patch includes the PvP events, Daily Missions and Age of Conan's 6th Anniversary Event. We have been running test events on Testlive for the PvP events, and there is another coming up, so if you want to get a sneak peek at what is coming, jump on Testlive this weekend!

Speaking of which, we ran a vote on the Testlive forums to find out which playfields people preferred to see during the PvP events – and I am proud to say that Conall’s Valley and the Wild Lands of Zelata have both made the cut. Thanks to everyone who participated in the vote!

Our 6th Anniversary event provides backstory for the PvP events that will start occurring in the game. It begins in Old Tarantia, where you uncover a plot to assassinate the King. Following the assassins leads to a deeper conspiracy which traces its roots all the way back to Tortage. Why have the Red Hand returned, and who is controlling them? What is the purpose of the mysterious Shadowstones? And what is the nature of the evil that lurks at the very heart of the Acheronian Ruins?

The Age of Conan, 6thAnniversary event will run for several weeks starting on the 20th of May and is titled “Shadows of the Past”.

I don’t want to start talking too much about patch 4.3 until 4.2 is out the door, so instead I wanted to answer a few common questions that have been asked on the forums about upcoming features.

We wanted to see how our class balance changes and the release of the new PvP weapon tier will change the dynamic of Player vs Player combat in the game. Together with a new minigame reward scheme which we will release with Patch 4.3 we are hoping to promote interest and balance in the regular minigame system. Unchained Minigames have been placed further down the roadmap on the basis of being a more “uncertain” system (requires a lot of code) as opposed to the current PvP updates which are faster to implement.

There were a couple of reasons for holding on to this one – an exploit that we found on the servers where we want to hold the race and our current focus on PvP balance. We’re saving this one for the future, when we are certain all of the pieces are in place.

The minigame map for Dragon’s Spine is included on our roadmap for release sometime after the Palace of Cetriss Raid. It will be in the next update after the Tier 5 raid is patched.

Speaking of which, there was a question about whether we would release Palace of Cetriss in pieces, somewhat akin to the way Tier 4 was released. The answer is slightly more complicated – The Palace of Cetriss Raid instance itself will be released as a whole, but we are planning on releasing some other raids as a part of the Tier 5 progression. Whether we release them all at the same time, or stagger the additional raids across other updates is still under discussion.

These two are intimately tied together and we have a solid idea of how we are going to build player progression through Tier 5 raids and new content. I’m saving all the details for a future game director letter, but new weapon combos, new items and new ways to play your favorite class are all on the table!