After a break for summer, everyone returned to work at the beginning of August and the guys have been working hammer and tong to forge some great new stuff for you.

A quick word on the current in game events, and then I’ll jump right into it!

All of the Unchained Raids are on Testlive for testing. This means a return to Vistrix, Yakhmar, Champion of the Honorguard, and Kyllikki. We’ve categorized these as Tier 5 raids and they will likely be accessible through the same lobby as Palace of Cetriss, which we have categorized as Tier 6 (more on that in a moment).

But of course, perhaps as important as the raids is the gear that you’ll be able to get from them. Our artists have been hard at work altering the visuals (and by popular demand these are a visual upgrade on the vanilla raiding sets, rather than the Khitai sets).

I’m happy to share a couple of screenshots of the new conqueror set. 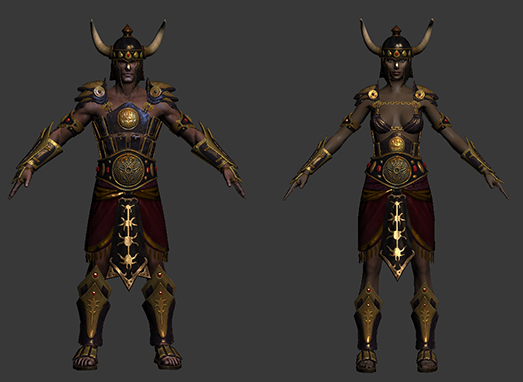 Visuals aren’t everything, of course, and I’m sure that you want to know what we are doing with the stats. I’m happy to say that we have found a way to add set bonuses to gear (Which was the original intention with Tier 5) and that this new tier of gear will be part of special sets which  gives us a lot of flexibility and opportunities..

We are still fine tuning the specifics but the potential is vast. We can enhance existing abilities with new effects or increased potency, we can add passive effects such as innate procs that will increase with every set piece added, conditional effects such as adding a scaling buff when performing critical hits or attacking. Or we can simply modify stats that have been previously left off gear, such as weapon damage.

And of course, this all ties back into the crafting system, allowing the set bonuses to be deconstructed in some form – which will add a greater depth and flexibility to the crafting system. This system will also allow us to separate the PvE vs PvP components of the gear – making PvE gear less viable for PvP.

The possibilities are endless.

For that reason we will make the Palace of Cetriss Tier 6, rather than a combined Tier 5 as we were previously considering. This allows us to focus on the additional combination of rewards that include new AA and abilities for each class in Tier 6.

Currently the rewards are based on the pool that exists within the game – as we gauge the effectiveness of the system we may increase the rewards.

We are still evaluating how to reward the next tier of PvP gear. We have the gear but we are still figuring out where best to place it in our various PvP systems. A part of our hesitation is the class balance changes that are still ongoing – and seeing how those turn out will give us a better indication of where the “healthiest” PvP in the game is occurring.

I gave a brief update on this on the forums, but it is worth mentioning here. We have spent some time evaluating the lore and achievement system in The Secret World and bringing it over to Age of Conan.

The evaluation showed that the code for achievements was only half-finished before the Age of Conan and The Secret World code branches were forked during development. This means that there is some extensive work to do on the backend and the interface. The good news is that we have given this a high priority on the code queue and we will push to get this done as soon as possible.

Given the ability to offer rewards for completing achievements, there is a vast potential here to provide a new tier of rewards to the game.

There is not a lot to report on the crafting revamp this month. Currently the gem and effects system is being worked on – and this is a large part of the customization that will emerge from the crafting system. There is a lot of balance to do, as well as setting up rules for the ways that gems can be slotted and utilized.

There have been a lot of questions about transferring characters from the Rage server and due to certain exploits we have kept those transfers locked for a long time.

After a discussion with the team in the US last week, we will open up the server for transfers, but with some conditions – gear restrictions and a gold cap. This is to ensure that players who used exploits will not receive an advantage on the new server.

Alright guys, I think that’s enough out of me for this month. Next month I will talk about our plans for Halloween as well as our plans for a solo arena.