It’s a race against time as to whether this letter will be released before the Achievement system patch.

If the letter is up before the patch, then you should all be excited! This is the first rollout of the Achievement system. This means 667 Achievements will be available for you, comprised of over 3000 sub achievements. There are over 60 titles available in this first rollout as well (and naturally the ability to display said titles).

Here are the achievements available in this first rollout:

* Levelling to 80 on all classes

* Reaching Faction rank 4 with all 13 factions

* Playfield races, race from A to B with bronze and gold timers

* Gaining the major blessing from each shrine in Khitai

* Completion of low level dungeons at the correct level

* PvP levelling for each class (level 4)

* Achievements also provide achievement points which we will be giving unique rewards and titles for at set thresholds.

We’ve added a new NPC in each major hub, known as the Chronicler of Deeds. The Chronicler of Deeds will award you with any major achievements that you have previously gained that are impossible to repeat – and he’ll let everyone know about the titles you’ve gained whenever you pass by. 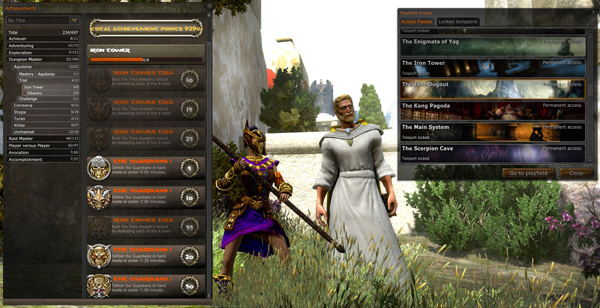 In addition we’ve revamped the shrine system in Khitai so that the desired emote always gives the best buff, the emotes are consistent between the gods and in many cases the shrines have been updated with an emote that it more representative.

The Playfield Access UI, which was previously only used by the Free to Play system, has now been made available to subscribers with the new patch. This UI allows teleporting to many popular locations in Hyboria – consider it a new fast travel system for getting around the world. We’ve tied this to the achievement score – Hubs and Border Kingdoms are unlocked at the first achievement point rank while outdoor playfields are unlocked until the second rank.

The Next Big Thing

Looking forward Update 4.6 will contain the new crafting system. We’re still plugging away at ensuring that everything is in place for us to roll it out but this is our primary systems and code focus until it is completed. Once the crafting system is in place, we have a good solution for loot and expanding upon the dungeon and raid system.

On the content team, we will be focused on finishing up our backlog of content (Dragonspine and arena) before putting our focus on the future.

We’ve also arranged for any of our players who back the new Monolith Conan Boardgame on Kickstarter to receive a new combat pet in-game, the Kang Zai. The board game is also using some of our in-game models for figurines, so if you’ve ever dreamed about having one of your favorite in-game monsters sitting beside your keyboard, you should look into supporting them.

Alright, that’s it for me today guys.