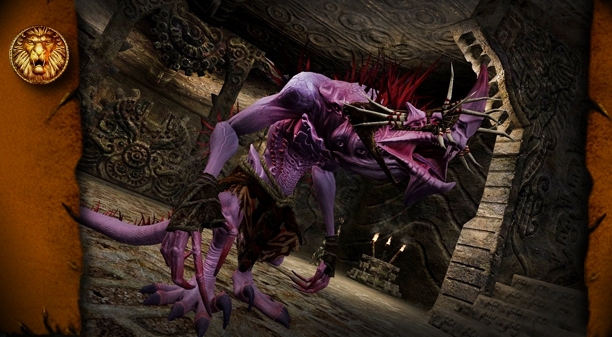 After the madness of the anniversary celebrations June has been a quieter month in Age of Conan as we work towards the server merges, stabilization and finalizing the new Dragon's Spine dungeons. I'll also talk a little bit about some of the concerns the community has raised around the dungeon loot in Dragon's Spine.

The server merges are  on track for summer, but there is a huge amount of work involved. Resequencing a database the size of what we have for Age of Conan is a considerable task and we want to optimize the process as much as possible to avoid having extended downtimes once the merge process begins.

A part of this process is archiving unused or older characters. For the sake of optimization characters that have not been active in a long time will be archived. This does not delete them, it simply means that if you have a character that you haven't used in years, the first time you load that character, the game will take a little extra time to load as it retrieves the character from the archive.

We will also be merging the US servers into the EU servers so:

Again, we are hoping to have this process completed before the end of the summer.

The Coils of Ubah Khan has been sitting on testlive gathering feedback for a few weeks and we are aiming to release it as soon as we feel that it is ready.

Together with  the Coils of Ubah Khan on Testlive we also have  a series of stability fixes which we internally call the “Boost version” of the game. I encourage as many as people to jump on there to test the new stability fixes - it is hard for us to get a picture of live performance without large scale stress testing. I am currently looking into organizing an event on the Testlive servers to serve this very purpose - more details on that when they become available.

In addition we have three more of the Unchained dungeon revamps ready for testing and we will hopefully push those out to Testlive soon.

There has been a fair amount of feedback from the community regarding the loot available in the first Dragon's Spine dungeon and as development continues on more dungeons, it is obvious that we need to look for various solutions to solve the problem of giving people more interesting loot - without creating a huge power gap between veterans and new level 80 chars.

For the first iterations of the new dungeons, we have agreed to proceed with the itemization work that was already done by the previous systems team and complete those sets.

We are however, looking into a longer term solution for loot. We haven't yet concluded on this discussion, but I just wanted to let you know that we are looking into many different avenues - some of which could tie into new AA abilities for the various classes.

During the "Your Voice" threads I received quite a few questions regarding Achievements in Age of Conan. This feature is one that we would like to get in quite soon as something that adds replayability across the entire spectrum of content in the game and provides players with good reasons to revisit and explore old content.

Once again, I turn the question back to the community. Post the kind of achievements that you would like to see, in both PvP and PvE. Let us know about crazy things that you can do in Age of Conan that we might not have expected (I think the buzzword for that is "emergent behaviour") and you never know, your mammoth-riding leap of faith from the top of Xibaluku might wind up becoming an achievement in the game!

As soon as we have available animation resources, we will be finishing up The Slithering Chaos. In addition Unchained PvP, Place of Cetriss and a new minigame are still being looked at for after the summer.  Beyond that, the Tradeskill revamp still requires a lot of work from our systems team, who are also on the tap for the new loot setup and new AA's.

I want to thank everybody who posted their thoughts on the forums as to what we can do with the old resource and building playfields under the new system - there were some great ideas there and some very clear preferences from the community. While not everything is feasible it really helps to be able to get that kind of feedback.

Thank you for your time,
Joel