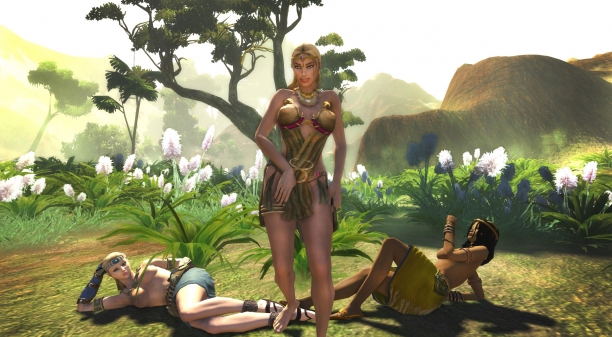 It’s that time of the month to talk about all things Age of Conan and today I am going to cover a few of the things we discussed during my planning trip to the US. I sat down with the team and we hammered out the roadmap for the next year (and more) and while I am not going to talk about things that are far far away, I will talk about some of the upcoming content, solutions and plans.

But of course, let me start by reminding everyone that our monthly Twelve Portents World Event is just one day away and the Thrice Drowned will rise to take vengeance on the world of Hyboria! The only information I have heard on the whereabouts is to search “Where worshippers gather by the running waters.” Remember, jump in and help out for massive battles and massive rewards!

We recently finished rebalancing the PvP items, as many people have requested, bringing them more in line with the rewards earned in PvE. We have always considered pure PvP to be a viable upgrade path post Tortage and this is obviously the first step to bringing the PvP players back into line with the PvE players. If you have some old PvP gear, it might be time to dust it off and try it back on – you might just find that somebody has polished it while you were away and added a few extra surprises.

This is all, of course, a part of a larger plan. We’re working towards what we call internally, patch 4.2.

4.2 is not a sexy name, perhaps, and we’ll give it something more appropriate as we get closer to the release, but the contents of the patch are as follows:

Some of you have been helping out with testing and refining our PvP events on Testlive and we appreciate the help! For those of you who haven’t, I'd like to provide a quick overview.

These are designed to be available all of the time on PvP servers, and only during the PvP Festival weeks on the PvE servers. These daily quests will change location based on a daily cycle and they are based on pitting players against each other to accomplish certain objectives. Some of the quests have directly opposed goals, while others require simple bloodshed as the answer. Some examples:

In addition to the daily quests, we are also planning festival events which will run for a week every month. These events will rotate between various areas of the game and the events themselves will cycle with a short cooldown between each to allow players to catch their breath! Each event also has its own complementary quests - which means the only losers are the people who don't even turn up.

Obviously 4.2 has a lot of PvP focus and one of the things we discussed during our meetings was the key improvements we need to make to the game to ensure that we cater to all of our players. This means we have prioritized issues like class and gear balance and you will see more of these initiatives in the coming updates.

Finally, 4.2 will also contain our 6th Anniversary event. I’ll provide a lot more detailed description in the next month’s letter but needless to say that it involves a return to the place where it all began – Tortage.

Apart from the usual assurances that we are working on it, this month I wanted to address a few specific points asked by people on the forums.

Firstly, Slithering Chaos is being retooled as a 12-man instance. We've decided that the game would benefit from this mid-tier of challenge and it will allow us to create a unique encounter.

This means that Palace of Cetriss will continue with the 24-man format. The Palace contains a total of 6 raid bosses. The dungeon itself works as a gigantic loop so you enter through the Front of the Palace, pass by the final boss room and then via a long and convoluted sequence of events, find yourself returning to the boss room, passing through the palace, but also the solid rock of the mountains surrounding it as well.

In terms of difficulty, Palace of Cetriss will be a natural progression for tier 4 raiders, but we are working on a new loot solution for Age of Conan that will change the way we think of the tier system.

More information on that in a future update.

The rather large amount of data work involved with crafting still continues. During the last few weeks, the coders have been cataloging all of the visuals used in the entire game, tagging them, and then adding them to the crafting script system. As shown in earlier updates, this allows you to "learn" visuals and then give any item in the game the visual that you wish.

During April, the crafting focus will be on the new gem system - which is the way in which statistics are tweaked and changed on a particular item. All of the gems need to be created and balanced, which is pretty big undertaking - especially when hunting down rogue combinations that have the potential to create unbalanced situations. It's time consuming, detailed work that needs to be approached as cautiously as a Pictish mother in law!