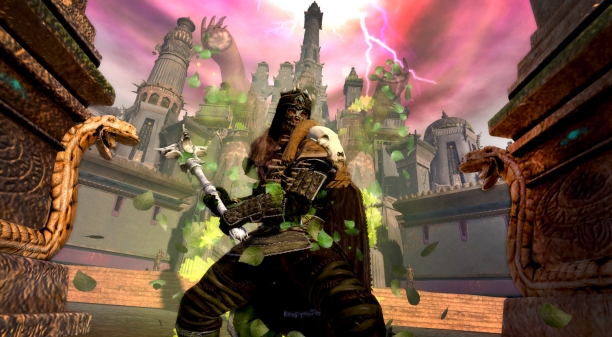 The smell of fear hangs over Khemi, the howling of wolves pierces the frosty air above Conarch Village and the dead roam the noble district of Tarantia. The Age of Conan Halloween event is in full swing, with an event in each hub city in the game, each offering unique rewards and challenges for the worthy adventurer.

If you want to join our Halloween event, you’d better hurry! The event will run until the 12th of November.

Of course, the beginning of November also marks a full year (where did the time go?) since we started our monthly PvE event, The Twelve Portents. For those of you who have been participating every month, you’ll finally be able to complete the mission and gain access to your legendary cloaks!

We’re currently running through the feedback and improving the event to make the next version even more interesting. This means including tokens, improving the loot, and full ability pass on the bosses (to remove annoying mechanics like knockback spam) and several new bosses joining the cycle.

The next version of The Twelve Portents will be bigger and better than ever before and we look forward to sharing it with you.

The next major update, 4.5, will focus on the new Achievement System. We’ve already begun to implement the system in the game, with dozens of achievements and categories taking form. The system is fully expandable so we will be able to make more and more achievements as we go.

The first pass of the system will include the following categories (subject to change):

In addition, we are hoping to be able to also include:

You’ll notice a few new mechanics mentioned in that last list so let’s talk a little bit about what those are.

Panoramas – Age of Conan has a beautiful, savage world. And what better way to share it than with picking out specific panoramas that really highlight the beauty of the world. Panoramas will reward you for taking the time to explore the world – providing a camera path, an achievement and experience.

Lore – The lore of Age of Conan is based upon the original writing of Robert E Howard. Of course in creating the scope of the world, we also draw upon dozens of secondary sources. As you play through the zones, you will now be able to collect lore for your lore journal – providing greater detail about the world and its inhabitants.

The Pit of Trials

A couple of months back, I mentioned our plans for a Solo Arena which includes both PvE and PvP components. Envisioned as a means for solo players to bridge the gap between solo gear and dungeon gear, as well as a place to earn bragging rights and server fame for PvPers (and a place to settle disputes). The Pit of Trials will be targeted to level 80 players.

In the PvE version, you can enter the arena and speak to an NPC, who will offer you a roster of that is based upon the pets that you have collected, with an associated fee. Once you have chosen a pet, you will be placed in a queue and when it is your turn, you will teleported into the arena to face off against a monstrous, deadly version of your companion pet!

We’ll be updating the Pet system to include power levels to coincide with the launch of this system.

In the PvP version, you approach a different NPC, where you can queue for a PvP match. When a challenger does the same, a message is broadcast to the arena, informing everybody of an upcoming match.

During the period before the match, other players will be able to wager on the outcome with a Bookkeeping NPC. Once the Arena is cleared, bets can no longer be placed and both combatants are teleported to the arena floor, and after a short countdown, the duel begins and continues until one player has been defeated.

The prize pool is always based upon the actual money that was bet, preventing system abuse but also providing incentive for duelists to encourage people to come and watch them fight!

Finally, in order to give the entire proceedings a sense of progression, you can earn faction with the Pit Masters (who have both a PvE and PvP faction) for competing in the arena. Over time, you will earn access to new pets, armors and vanity items as well as unlocking special quests from the Pit Masters.

It’s too early to put a date on the Pit of Trials, but we hope to be able to bring it to you as soon as possible.

See you in the shadow of the Black Pyramid,