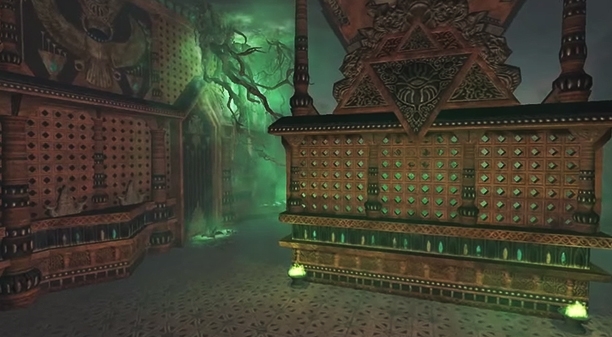 Hi everyone, it's sezmra here again, ready to tell you more about the Palace of Cetriss in this update! Our developers enjoyed a much deserved break in July but are back hard at work on Age of Conan! You've already gotten a taste of the Palace on the test server, but let's learn a little more about some of the other bosses you'll encounter within.

Igneous, Stone Coat, and Brittle Back

Not even the Palace of Cetriss is immune to the harsh environment that is Dragon's Spine. The recent seismic activity has not only uncovered the hidden mysteries of the mountain chain, but has taken its toll on the palace itself! Deep within the bowels of the structure, various portions of the architecture have crumbled to allow the desert sands to pour in along with some of the more peculiar inhabitants of the mountains.

Strange beasts of living stone have taken up in these lower depths of the palace. They now each personify their origins having been shaped by the power and magic of the lotus. Adventurers must conquer each of these three menacing beasts to continue deeper into the darkest reaches of the palace.

The fourth encounter is an unforgettable challenge, difficult to be sure. Raiders will see firsthand the effects the Emerald Lotus on humanity as they face off with a group of dominated Shemites! Witness the sheer power that the lotus offers the Shemite witch and her allies; waste no time in your battle and defeat the lotus’ forces before it’s too late and the dreadful magic overcomes all!

We're working on the base stats of the new armors that will come along with Tier 6, and the visual assets are shaping up nicely too! One of the popular topics we've seen concerns what the visuals for these new armor sets will be like and if they'll be unique to each class. Realistically, creating twelve separate sets of visuals is simply not feasible with the resources available to us.

What we expect the outcome to be is that there will be four base armor types, and two to four sets might use the same base visuals with some color alterations between different sets for a sense of variety. We’ll be showing off these awesome new designs to the community soon, so keep your eyes peeled!

Set bonuses are still being considered with these new armors, and it's possible that the Tier 5 set bonuses will be reused on the Tier 6 sets along with smaller set bonuses being added to the new accompanying accessories and weapons. Though, it's unlikely that we'll add completely new eight-piece set bonuses due to the amount of time it takes to get these set up and balanced for gameplay. There is also the possibility that there will be a more generic set bonus, rather than twelve unique ones for each class.

Overall, we're quite excited with the development of The Palace and will be showing you even more in the weeks ahead! Remember that you can hop onto the Testlive server to help test out the raids and content coming in this future update!