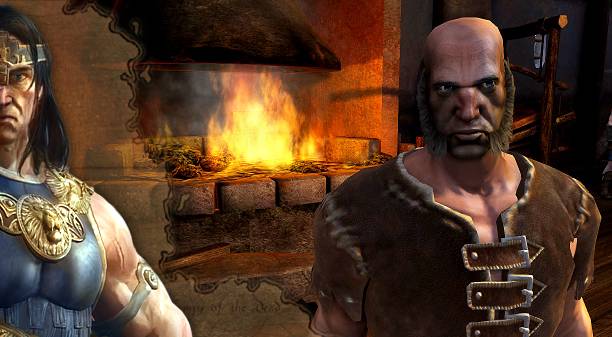 As promised in last month's letter, this time out we are taking a deeper look at the revamp of the crafting system. As always, disclaimers first. This works is currently moving from design to code internally, so this is subject to change. We don't usually go into details on changes this early in the process, but this is such a fundamental change in the approach to crafting that we wanted to share the details with you, and let you know the thoughts behind the process.

The first thing to stress here is that this process hasn't been approached as tweaking or improving the existing system. This is a totally new system. When we sat down and looked at the system and how we could add depth and improve engagement, it became clear that it was better to start over. So rather than try and shoe-horn what we had into something a little more useable, we decided to bite the proverbial bullet and start over. This meant that we would not be restricted by the limitations of the original system, and that we were free to try to create something with a lot more freedom for you guys to experiment with.

The concept of progression being linked to a series of - often awkward - quests will be completely removed. Progression in crafting and gathering will now be linked to actually making items and using the relevant skills. There will be no more make or fetch quests required to level-up your skills; instead, you will progress through the levels as you use the skills. Trade-skills will now also be available as soon as you hit level twenty after the Tortage experience.

The team feels that this will provide a more natural and familiar system for players. The original intention of the quest-based system (to avoid the feeling of "grinding") never quite worked as the original developers had hoped, and combined with how gathering worked, limited the number of people interested in developing their trade-skills. Hopefully this will address that.

The actual gathering and crafting skills will also be re-aligned a little so that it is clear which purpose each skill serves.

Nodes will be changing completely, with more variety and locations. Also, and perhaps of most interest to everyone, is that the random "attacks" have been dropped from the system. They simply didn't generate the type of effect that the original design was aiming for. They ended up just being a little bit annoying, and felt unnecessary in the grand scheme of things.

We will be maintaining the concept of a "critical success" when gathering however, so you can still get a pleasant surprise when out-and-about gathering!

What's more is that since the quality, colour and worth of the raw materials will now mean something to the crafting process, there will also be a refining process, which will turn the raw material into a better version of that material, which will return a narrower deviation in stats when used in a recipe ... but that is getting a little ahead of ourselves, isn't it? So a good time to talk about making the items themselves...

Making an item will require two different types of ingredients: Components and Effects.

Everyone will have the base recipes for the template of a given item. So if, say, you are going to make weapons using the Forging skill, you will already "know" the recipe for the base of a sword, for instance. Each item requires between two and five components. Some may be raw materials, and some may be made, bought or dropped as loot.

This will dictate the base of the item and will calculate some of the core statistics and values for that item (like DPS on a weapon, or armour on a piece of armour). The quality colour (green, blue, purple etc.) will be decided upon by an average of the components used.

Then you have between one and six effect slots. These are where you add items that are going to add the additional statistical bonuses to the item. These items will also come in quality colours, and their descriptions will allow you to see which statistic they might influence.

Then you will see a preview of the item being made. There is a % variation inherent in the system that will decide upon the final stats of the items based on the quality of the effects used. The preview prior to creation will always show you the minimum value that your item may end up with ... but of course the cool part is that the finished piece may end up much better than the base ingredients dictate ...

Now is where the added layer of depth comes in. There will be some special considerations when trying to craft that perfect piece of armour or weapon. In addition to the bonuses you might get from the effect ingredients themselves on an individual basis, there is also the fact that, when used in certain combinations, the ingredients may "blend" to provide an additional bonus to the item.

So, as a simple example, you may be adding three different effect ingredients to a recipe. Those ingredients will provide the base stats that you wanted to add based on those items. So the "Red Jewel" may be adding Strength, the "Old Bone Dust" might be adding Constitution, and the "Giant's Blood" may be contributing towards Combat rating. Those are the known effects (the effect item's descriptions and quality colour will be giving you the indications towards that), but the real value would be in what additional bonus you get from combining those three particular items. When combined, that particular combination of items might mean you get a bonus addition of, say, extra Critical Rating.

This is where knowledge and experimentation will provide those willing to learn the secrets of the ingredients with the greatest rewards. These special bonuses will never be visible on the preview prior to creation. They will have to be discovered by players, and while some may share, it can also allow for players to guard their most valuable discoveries, and not reveal how they made any particular item.

This is intended to add the potential for players to have these kind of discoveries that can be "their own" (at least until someone else discovers it), that you simply can't get when absolutely everything is labelled and set in stone.

This blending of items allows for a lot more variety, while still allowing crafters to make an item that they have a fairly good idea about before they create it. You will know most of the possible stats that your item will have, but there will be the additional, more mysterious element of figuring out these blends to find the best bonus additions for that item.

Likewise, there is also a concept of "critical success" wrapped into the equations, which can increase the stats awarded when the item is completed. Rare materials may also drop during game-play or may even be awarded as quest rewards down the line.

The other major change to the system is that the crafting processes themselves will now take time to complete. The more complex the item, the longer the construction time. Players will, however, have a crafting queue that expands as they level up.

As you gain higher levels, you will also gain more slots in the queue (final numbers to be decided during testing) and then at level 80 you will gain an additional queue, so you can have two creation queues going at once.

There may also be locations in the world that will "speed up" the process if your character is within range. This is something that we will most likely experiment with during testing.

One other important note with the system is that we want to encourage people to experiment, and to that end we will also be "saving" your progress in a given skill, if you choose to switch skills. You can still only have two gathering and one crafting skill active, but if you drop one to pick up another, you can later return to it, and you will not have lost your progress in that skill, so no need to "re-grind" something you have already accomplished.

What about our existing stuff?

None of the old items made with the system will disappear. All gem slotted items will still be there. It simply won't be possible to add or remove gems to slotted items after the change. We will be giving plenty of notice to players prior to the changes going live, but any of the current trade-skill items you want to have in the bank for use, or just for posterity, will have to be made prior to the changes going live.

After the changes, it will not be possible to alter any of the old items, but they will still be there "as is."

Players will most likely be converted to the closest comparable skills in the new systems, although that will depend a little on testing and feedback.

We will also most likely provide some kind of "head start" kit for veterans, and those who help us with testing once the system goes to the test servers.

There is of course one skill-set we haven't touched upon yet, and that is the architecture profession. With the revamp, it kind of sat outside the theme and intention of the more open creation system we wanted to forge for items. This meant we had to do something different here.

The current plan is that the architecture skills will no longer be something you take as your sole crafting skill, it will be available to you based on your rank within your guild. This way those with the appropriate rank in the guild will always be able to perform the building role previously undertaken by the architect skills. We felt that adding the skills on top was an unnecessary game-play barrier when it comes to creating your guild cities, and that this should represent a more user-friendly approach.

We are excited to get to create a new, deeper system like this one for the game. While combat is obviously the central part of Age of Conan, it is also an MMO, and the beauty of working in the MMO genre is that over time we get to expand upon things, and bring in systems that provide a deeper experience and broaden the appeal of the world itself. This is part of that process, and we are looking forward to the testing, and to your feedback, starting with this letter!

The crafting update isn't the only thing on our hands at the moment. The new raid content is coming along nicely, and the art team have been going through and adding the lighting and atmospherics, really setting this location up to provide an epic backdrop to some of the most challenging encounters yet.

Also, we are working on three new versions of some of the instances that were released last year. Dead Man's Hand and The Forgotten City will be getting level 80+ versions (with rewards along the lines of The Refuge of the Apostate) so that players at maximum level can get some returns from these daily areas. Likewise, The Breach is also getting a new 80+ team version, so that there is another option for team rotations. In all those cases, the original scaling solo versions will of course remain in place. These are additional new modes for these areas, to make them even more useful for players, and ensure that they are also relevant at the end game for those looking for a little more variety.

So there is quite a bit to come, and we are looking forward to getting these updates onto the test servers for public testing.