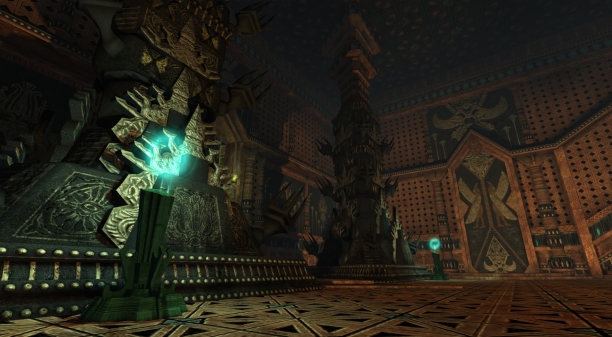 Hi everyone!  It's time for me to check in to give you more updates on what we've been working on for Age of Conan!

The seventh anniversary of Age of Conan was unforgettable!  We're extremely pleased with all of the great content that's been added to the game over the years and Shadow of Vanaheim was no exception!  It's time to keep moving though and to look ahead to what's in store for the game in the coming months.

The wonder that is the Palace of Cetriss looms mysteriously in Dragon Spine.  Within, you'll face dastardly foes intent on destroying you and your fellow adventurers!  Unlike any of our existing raid tiers, we will be splitting up the Palace of Cetriss into two modes of challenge.  By featuring these different levels of difficulty we allow a more accessible experience for a broad range of players.  The progression raiders within the community can compete for world first accomplishments and the best, shiny gear available to them.  Meanwhile, the more casual players found within our community still get a chance to experience the compelling story and combat mechanics while getting their hands on new loot!

Offering gameplay such as this to different kinds of players is awesome, so all types of players can enjoy the story, the quests, and the baddies!  We are still working out the exact details of how this friendlier version of the raid instance will be made available to the player base, but all you have to do is keep your eyes and ears open for more information and official announcements on how we'll implement this feature.  We'll have more to tell you soon!

The story for this imposing Palace will mark the first appearance of Lady Zelandra and her impressive entourage.  Alarming rumors of activity in the area have caught her attention.  A sickening, ominous haze tinted with an emerald sheen emanates from the Palace.  An abode built by the powerful sorcerer Cetriss, the palace was once thought to be sealed, its innards supposedly lifeless and empty.  It seems there are even more secrets to find within.

Players will follow after a party of desert raiders who just may be accompanied by two slithering Yothian warmares if the reports are true!  You'll assist Lady Zelandra by providing her safe passage to enter the Palace to get to the real mysteries discovered inside.  Currently the first encounter of the Palace is available on the testlive server and all are welcome to assist in testing.  We should have the second of the six encounters found in the raid instance available on the testlive server soon.  You can find out how to participate here.

We want you to hop in and try out this new raid content, hardcore and casual player alike.  New encounters, new loot, new story quests!  We'll be back again next month to give you more details on development for Age of Conan!