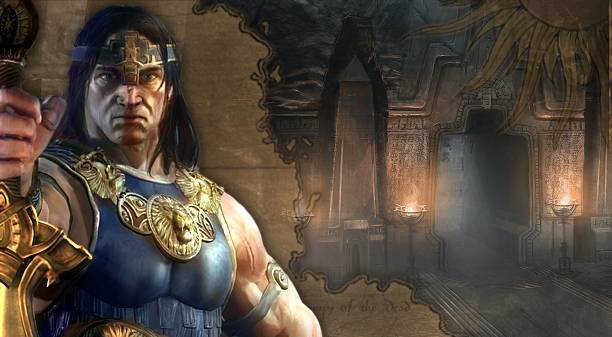 This month we are taking a look at the House of Crom, the new dungeon location that will be going live in the 3.02 update that is currently planned for the end of the year. House of Crom will be a free content update available to all premium players. So this month we set out to corner some of the developers and get them to spill the beans on what is coming your way with the House of Crom.

"A devil from the Outer Dark,' he grunted. 'Oh, they're nothing uncommon. They lurk as thick as fleas outside the belt of light which surrounds this world. I've heard the wise men of Zamora talk of them. Some find their way to Earth, but when they do they have to take on some earthly form and flesh of some sort."

So what is the House of Crom all about? Writer Joshua Alan Doetsch and Senior Quest Designer Karl Andre Bertheussen sat down and explained some of the background to this upcoming area. What dangers might you find there? Lots of dark and dangerous ancient evils for a start, and writers like nothing more than bringing such lurking evil to life!

Joshua: "To understand House of Crom, one must understand the fall of Atlantis; but the teeth of time have savaged this history to tatters.

In this update, players will get the chance to explore the long-forsaken ruins of the House of Crom; an ancient temple built by the Atlanteans. Locked away for thousands of years within the Eiglophian Mountains, undisturbed by the people of Cimmeria, this temple has recently been defiled by a group of Vanir excavators. Hungry for lost treasures, they delved deep, unaware of the myriad of dangers that have survived the millennia.” 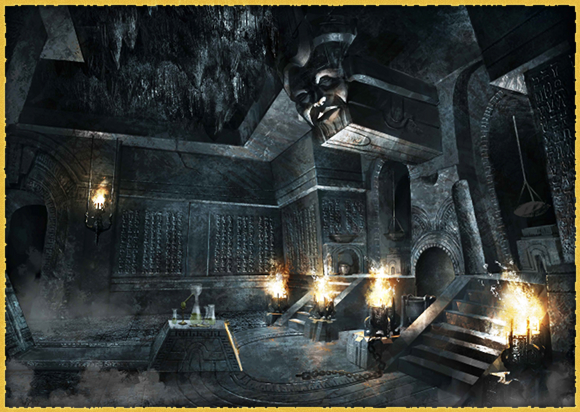 “Of the bickerings of the kingdoms, and the wars between Valusia and Commoria, as well as the conquests by which the Atlanteans founded a kingdom on the mainland, there were more legends than accurate history.
Then the Cataclysm rocked the world. Atlantis and Lemuria sank, and the Pictish Islands were heaved up to form the mountain peaks of a new continent. Sections of the Thurian Continent vanished under the waves, or sinking, formed great inland lakes and seas. Volcanoes broke forth and terrific earthquakes shook down the shining cities of the empires. Whole nations were blotted out."

Karl: "So in those ancient times mighty Atlantis faced oblivion. The mainland Atlantean kingdom had scarcely prevailed over the cataclysm, and surviving tribesmen fled to it in ships from the sinking island. In a desperate effort to preserve their race and culture, the surviving Atlanteans, by order of the Queen of Atlantis, strived for the mountains in an attempt to appease their god Valka. Deep within what is known today as the Eiglophian Mountains, they built a great stone temple; but despite countless rituals and prayers, their hardship never relented. The Atlanteans feared their efforts were for naught; the Queen more than most. How could she tell her people, who loved and trusted her, that they all would die and be forgotten? Instead she told them pretty lies and kept them working, and the secret sat in her guts, gathered bile, turned to acid and spite, and ate away her sanity.

In the end the Queen began praying to the whispers in the dark, and finally she received the response she was so desperate for. She told her subjects Valka had answered their prayers, the taste of her lie fresh on her tongue; and they praised their god and their god-fearing Queen. For several months, all was well within the temple; the strength of the Atlanteans renewed by the Queen's news. Then one day, in the span of a single moment, everything went silent...

What exactly will the players find there? Hopefully they will have some fun finding out!"

Inside the two House of Crom dungeons, players will revisit what remains of the temple created by the Atlanteans, and discover for themselves what happened thousands of years ago. House of Crom is actually made up of two vast dungeons. One social dungeon that supports multiple groups at the same time, and one six man dungeon. These areas are the largest indoor dungeons we have created to date, and there is a lot of great gameplay and encounter crammed into the ancient halls.

We caught up with designers Peter Lavoie Massicotte and Anne Sofie Nielsen-Man on what exactly you can expect to find inside these dungeons.

Peter: "They will quickly learn that not all silence is vacant. At a top level, the challenge and the enemies will be on par with what we’ve seen in the Paikang Districts, and in keeping with the more recent additions like Ardashir Fort as well. Players will have to react to many different situations within these encounters, employing different strategies to deal with the varied mechanics we're offering, and in doing so, will discover the horrifying truth to what happened to the last Atlanteans."

Anne Sofie: "Threshold of Divinity is a social dungeon for up to four six-player groups for max level characters with nine separate encounters. From the frozen halls of the dead, where those who died raising the temple sleep the eternal rest, to the ritual chambers of Atlantean priests, the players will unravel a haunting story of eldritch horror and foreboding. Sent to aid the Cimmerians in driving out the Vanir desecrators, they will fight enemies both old and new, solve ancient mysteries, and learn the truth behind the House of Crom and what happened there. And they might find that some puzzles are better left unsolved. There will also be some challenges that require co-ordination across groups; these won't be essential to your experience, but they will offer a very different gameplay experience and some of the best moments this dungeon offers...if you can figure out the mysteries of this area!

It really adds a very interesting social dynamic that you can't always do with single team instances, so it was really fun to get to play with the possibilities of multi-group play." 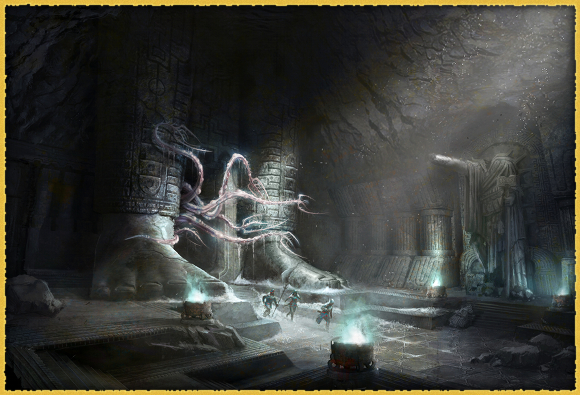 Peter:  "The Vile Nativity on the other hand is a six-player group dungeon for max level players. There are seven encounters in all; two of them optional. From the long-forgotten library where the Atlantean scholars once studied, to the treasury room where the wealth of Atlantis was locked away, we are offering players a dungeon rich in lore and storytelling. Those who seek it could perhaps even learn snippets of the Atlantean language for themselves, unlocking even more clues into the history of the fall of Atlantis. Expect to experience everything from dodging explosions to working with unexpected allies, gargantuan foes to cryptic Atlantean riddles. One boss even shows how death does not release one from his service…

We are very proud of how dynamic and interesting we have been able to make the group instances this year and House of Crom hopefully continues that run! I think players will enjoy the different encounters found within, and we couldn't have asked for a more epic location to base them in. The sheer size of the House of Crom areas was a little daunting to be honest!

I think we have pulled it off though. I'm looking forward to seeing how the players handle the challenges we have cooked up for them."

Knut Jagels (Systems Designer): "We will be bringing in new Atlantean themed items. Power wise, the rewards will be on par with those found in the more difficult instances, and there will be all the regular token and trophy rewards that you would expect to find.

It is always nice to be able to bring in some new visuals, and offer players some new visual variety. Especially as we now have the social vanity system. That really adds value to the new visual looks that we add to the game."

With the 3.01 update almost upon us (final testing is being done as we write this letter) we are already eagerly awaiting 3.02 and getting House of Crom (and the tier four raids, more on those next month!) ready for your adventuring enjoyment!