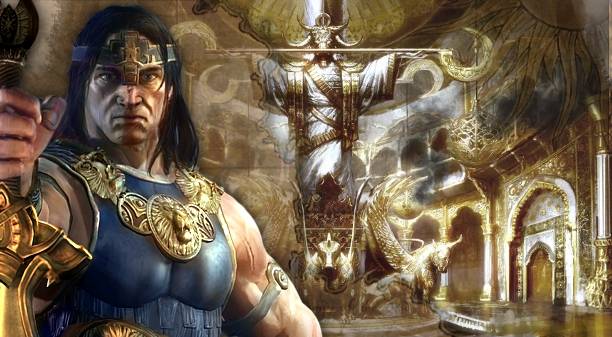 This is one of the most exciting development letters we have gotten to do for Age of Conan. With the success of the Unchained launch, and the great reception for the adventure pack, we are now energised to get a lot done over the next year. It is always easier to be doing your planning knowing that, overall, people are responding well to the direction you are taking the game in and that we get to do even more for the game over the next year! So this letter will announce quite a bit of 'stuff' and we will talk about some targets and the dates we are aiming for.

Yes, this marks a change from the more cautious 'update by update' approach that we have usually taken when it comes to talking about our plans for the game, but with this being the period when we make our plans for the next year we wanted to take a different approach this year, and reveal more of the cool stuff that we have planned. This being the case there will be things mentioned in this letter that might slip, change, or end up in different forms than listed here. That is the flip side of being more open with the future plans, there is the big neon red disclaimer that things might change. Likewise there is actually more than this that might happen, or things that might get added, so just because something doesn't appear does not mean it won't end up being considered...so disclaimers out of the way, let's get on with the good stuff...

Actually no, one quick interlude before the good stuff...

The Summer Survey and its influence

Thanks to everyone who responded to the summer survey last month. As with last year it gave us a lot of good direction and thoughts on what people want, and just as last year, it has driven some of the things that you will see on this list. The big winner in that respect is the request for having dual-specs for your feat builds, which was the most popular request by a major margin (more on that later), a confirmation that the tradeskill revamp we mentioned last month is backed by you guys too, and the fact that you would like an improved LFG interface or group finder feature. You all also strongly favoured the adventure pack format with adding new areas with a variety of new content leading off it rather than any one individual priority.  Thanks again to everyone who took part! Your feedback is always a valuable part of the process at this time of year.

So as not to fall foul of people holding dates mentioned as being set in stone, we will take a look at most of these planned updates as being in order, with some approximate timings attached, but as above, please remember that these are subject to change. In fact, with a live game, we can almost guarantee you these things will change, but we wanted to share with you the battle-plan for the year ahead.

This one is coming up pretty soon, and much of what is included has already been mentioned in previous letters, but we will recap quickly! This is primarily a Dreamworld technology update that brings new features and optimisations to the engine.

Content wise we will be adding some new boss encounters to the Turan areas, and doing some further clean up of the level 80 Khitai playfields to make the play experience smoother.

Coming up before the end of the year, this update focuses on some great free content additions and PVP improvements.

This update will see the launch of the House of Crom dungeons. We will talk in a lot more detail about House of Crom in next month's letter (yes, we are acutely aware of the irony of revealing details on a dungeon some three years after it was announced, but we mean it this time!), but safe to say the team have some really, really cool stuff lined up inside these areas.

Systems wise the team are mainly looking at the PVP centric changes we mentioned previously, with a good long hard look at the sprinting mechanics, the new re-spawn system for mini-games, and some other miscellaneous PVP tweaks.

This update will conclude the Tier Four raid experience, with the final Khitai raid instance, and the last two new encounters in the Tier. Those players brave enough to face these final dangers will finally be able to learn about some of the deepest mysteries of Khitai.

This update will also feature some great new additions like the new PVP world bosses and, as requested from the player survey, a new Multi Feat Specification system.

Systems wise the team aim to give the Priest Archetypes a little care and attention. This will involve looking at combos, abilities and their feat trees.

This update should hopefully come very early in 2012.

This will be another mainly technical update, and a very important one for the game. This update will bring with it the new Dreamworld Single server technology. This will allow us to do all manner of cool things, most notably cross-server mini-games, and a group or instance finder system.
Content wise we are working on new versions of the recent daily ACG dungeons (The Breach, The Forgotten City, and Dead Man's Hand). Two of them will be re-tooled purely for max level AA balanced characters to provide more variety for those looking for their daily tokens, and one of them will be a new team instance. (The original versions will not disappear! These will simply be new variants for people to enjoy, with a different challenge level and appropriate rewards.)
This will hopefully go live during Q1 2012.

This update will be the next adventure pack. We aren't quite ready to announce the location and theme for this pack just yet, but pre-production work is in progress. We are currently aiming at Q2 2012 for this adventure pack to go live.

This update will also be the most likely landing spot for the launch of the full trade-skill revamp.

Systems wise the team will be looking at the Mage classes in a little more detail and give them the same once over as they will have done with Priests in the previous update.

Stuff without an update

There is also some content work that is carrying on in the background, and isn't currently set against any one particular update. The stuff on this list will appear scattered throughout the various updates listed above. This is mainly the PVP changes we talked about in the July development letter, since that work will be ongoing. We will be looking at building on the Blood and Glory server rule-set with some more server specific rules. Considering the next new PVP area, and working through the rest of the possible PVP changes we discussed in the July Letter. Those things will go live when they are ready, so they aren't locked into a specific update. This is because we don't yet know the scope and complexity of some of them until more design work is done.

It is going to be a busy year. We are both excited and scared by the challenges ahead. A little fear of daunting tasks is usually a good motivator!  It is a huge thank you to all of you who have contributed to the success of the game over the last year. It is your support that has put us in a position to be able to continue to dedicate these resources to Age of Conan: Unchained and continue to build and evolve the game! These are exciting times ahead and we hope you will all enjoy them with us.