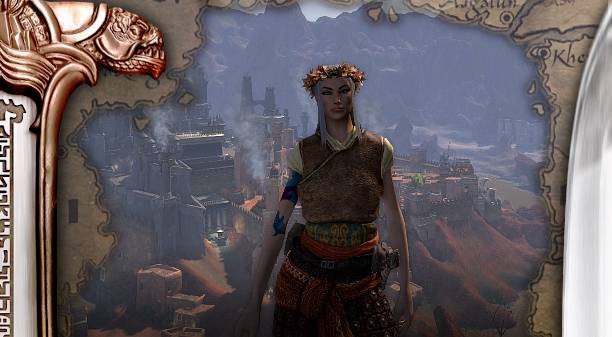 Misiuggah, Polish player and an active and well known member of the EU forums, speaks in this month's Player Spotlight.

Name on the Forums

Eh, this is a hard question :) I'd say I have two more "mainy" characters - Ephel and Misiuggah. Named after great bands like all my other toons.

Which country do you come from?

How long have you been playing Age of Conan?

Since May 2009, with over a month break in summer 2010 (but I swear, I had a good green-eyed reason :) ). I always loathed MMOs - though of them as an inferior to normal cRPGs. I checked a few titles, but couldn't really find my place there. I knew there was a game called Age of Conan, but it had a bad reputation. Anyway - when I saw a 7-day trial ad - I decided to check it.

I started as a HoX on Two Eagles and it was love from the first fatality. I was sold by the art design and the engaging combat system. Even battling plants was exciting! Before that time Conan was something like He-Man for me, but I quickly picked-up original REH stories and the world created by him and Funcom (kudos to you for making it come to life) soon became my favourite. I played for a week, had some awesome moments in the Underhalls, but got annoyed by the ganking squads in Khopshef (sadly this is how many players used to start and finish their experience). I had to continue playing, so I bought the game, rolled a barbarian on Rothat and joined Black Dragons few weeks later. Found my home there.

Rather which I don't like - Lacheish Plains, Poitain and Purple Lotus Swamp - I hate farming mats. I have good memories connected with all the others playfields and I can show you a few cool places in any of them, anytime. I really appreciate the work done on all the Acheronian stuff - the ruins can be found on each playfield and they're really sinister.

Toth-Amon's Stronghold has a special place in my heart, because of the effort my guild made to complete it... and big damage numbers :)

I like playing healers in AoC - they deal outstanding damage and keep everyone alive at the same time. I like my Priest of Mitra because of the crazy burst she can produce and my Bear Shaman because he's just badass. Learning more things about classes and pushing the boundaries is my goal. I also like being Mr. Know-it-all, so this attitude helps a bit ;)

I'm an altoholic, so I like to play my other 6 characters also. You're missing a healer/rogue/dps/tank for an instance? Fine, I'm relogging...

On which server do you usually play?

Roth... errmm... Crom - I devote all my time to the guild (does that sound creepy?). I used to do some low-level PvP on Two Eagles, but then RotGS came out and I decided that I need full Khitai set on all my toons.It's really fun doing stuff with my guildies - chatting, laughing, drinking - so I tend to be where they are :)

What is your preferred play-style (soloing, raiding, PvP, mini-games ...)

Everything that involves killing. I like solo-play, but usually I am invited to parties as soon as I log in. I don't even have time to check the AH or craft potions :)

My guild is focused on raid progess, so in the end raiding and HMs take the most of my game-time and all PvP activities have the lowest priority (also because I'm a bad case of a clicker and keyboard turner).

Are you member of a guild (or even a guild leader)? If yes, care to shortly introduce your guild?

I'm a member of Black Dragons since June 2009 (and an officer since some time). I joined them when there were only 4 other active players (those who would talk on voice comm about world domination) and our first success was downing Atzel - that instance seemed really epic that time, the ceiling was so high...

We have now much more active players, but just enough to form a raid in the evening. We're a rather laid back guild, we try to progress through tiers (finished T3 not long ago, starting T3,5), but without too much stress or discipline. I'd say we're rather a bunch of friends than a proper guild. We welcome all new players and try to help as much as we can, if only they're willing to integrate with us :) . Sometimes our "pitate ship" attitude turns people off (and very fast), but those who stay - I think they like it :)

What was your most epic, funny or special moment while playing Age of Conan?

Everytime we down a new boss is a special moment! But I remember one thing from 2009 - the GMs from Rothat made a pict invasion on Border Kingdoms. They were spawning hordes or epic picts and bosses and enlarging them to giant sizes. Several raids showed up to fight them and the GMs were helping us. When there was not enough picts we fought each other. Lucky players were awarded with a crazy knockback by a GM that would send them flying over the map.

I also remember how we defended our keep once. The outer door were bugged and stayed at 1% since the previous siege, so we had attackers inside since the first few seconds. Members of 3 other guilds helped us defend the keep (Best of the Best, Firewind and Strażnicy Asgaardu). We've succeeded, but you couldn't jugde what would be the outcome until the very end.

Doing Enigmata for the first time was a big moments for me as I also like HPL - it's like you've put awesome into awesome.

Do you have a fansite/blog/wiki related to Age of Conan?

Nope, I'm just running a thread on Black Dragons' forum where I post news and interesting things related to the game I find in the internet (mostly official forums, where I post a lot).

I really like reading Assassin's Hideout, Kentarii's AoC Armory is a great help and aoc.yg.com is simply a must-know.

Anything else you want to share with your fellow players?

Yeah, dry your tears and learn to play. Stop looking at how many AA levels you have or how many faction items you bought - the thing you need doesn't cost anything and can't be farmed from mobs. Enjoy the game, keep your mind open and it'll come to you :)

No, seriously - I wanted to thank my guild for all the good times we've had and all the wise people on the forums for helping me get a firm grasp on the game.

And to those who don't know the works of REH and HPL - you should be ashamed :)