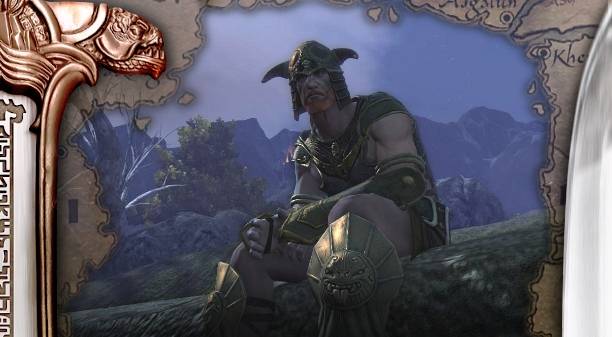 This month's Player Spotlight is on Raude from the European forums. He is an active member of the fan created Age of Conan art project on deviantART and has also won prizes in the past for his great screenshots. Today he tells us a little something about himself.

Name on the Forums

Which country do you come from?

How long have you been playing Age of Conan?

Since September 2008, have had a few shorter and longer pauses, though.

My favourite playfield would probably be Connal's Valley. My main character, Ernin, was the first one I created when I logged into AoC. Since he is a Cimmerian, I travelled to Conarch Village and Connal's Valley. It might be the first impression that formed my liking to the playfield, but I still enjoy visiting it time and again, especially now, while hunting for various gear sets.

The only class I play and really know is the Guardian. I still have no idea how any of the casters or especially Herald of Xotli works.

On which server do you usually play?

Started (with Ernin, I think he was named "Gradivus" at first) on Aquilonia. Unfortunatley, I was stubbornly holding on to the Sword&Shield setup, which wasn't such a good leveling idea at that time. When I reached Kheshatta, I was basically a walking lump of PvP XP, and was treated as such.  So I trasferred to Hyrkania, where I swiftly learned to appreciate the small but welcoming community. After a while on Hyrkania I started to find the raid progression a tad too slow, though, so I went on to Crom, where I've been ever since.

What is your preffered play-style (soloing, raiding, PvP, mini-games ...)?

I level mostly on my own, at my own pace. At level 80, while not in Khitai, I do enjoy raiding. I've only recently completed my Tier 1 guardian set.  I know, three years to get there is quite a long time. I guess I'm what people call a "casual" player. I will definitely be playing PvP on the new server, which is also a great piece of new content, because it's extremely difficult to get into PvP for new players at this stage of the game.

Are you member of a guild (or even a guild leader)? If yes, care to shortly introduce your guild?

I indeed am a (relatively junior) member of The Free City of Lochlainn on Crom. (Was a member of Clan Koragg back on Aquilonia and Berades on Hyrkania - glad you're still alive, guys!) The Lochlainnians describe the guild (which, theoretically, is no guild - it's a free city where everyone can join and noone is a superior or subordinate) as "the paramount of casualness" AND, allegedly, "pants are optional" (no, I have no idea what that means either...). If anyone is interested, the webpage is http://lochlainnguild.com/

PS - I heard a rumor that Lochlainn is supposed to be the oldest guild on Crom...I guess I'm a bad citizen and don't know too much about the history of the city.

What was your most epic, funny or special moment while playing Age of Conan?

Recently, it was getting the last piece of my Tier 1 set. Sounds odd, but I was raiding on that character since 2008 (T1 and 2) and simply had bad luck with the drops. Other than that, it's really hard to single out a specific moment. Most of my time spent in this game has been "epic" and "special".

Do you have a fansite/blog/wiki related to Age of Conan?

I wouldn't call it "mine", since it's run by Bombata (who doesn't require an introduction, I think), but I'm active in the Age of Conan group at deviantART, where we gather anything related to AoC, including fan art, UI projects, screenshots, guild art and, recently, I'm creating an armour set database for AoC (it's likely you've seen me spamming announcments on Crom). I've gathered a fair amount of pictures so far. The players have been very active - some people were really happy to show off armour they have been keeping stored for three years. A BIG thanks for implementing the Vanity system, by the way!

Anything else you want to share with your fellow players?

Be nice to the new people who arrive with F2P!