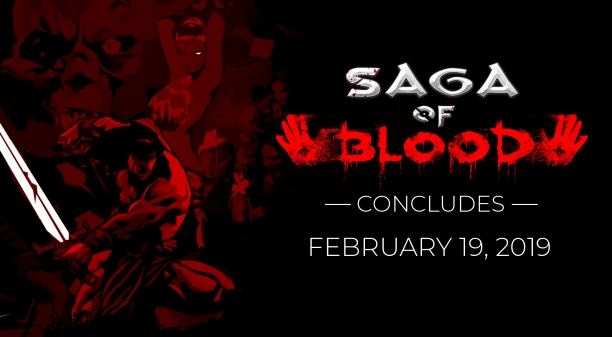 What happens when Saga of Blood closes?

All servers will go down for extended downtime on the morning (EST) of February 19th, 2019.  During this time, Saga of Blood will be merged into Fury.

Do I get to keep my Saga character?

Does my Saga character have to go to Fury?

Yes, as a PvP server, all characters on Saga of Blood are being moved to Fury during the merge.  You will need to use the Character Transfer service from your account page to make any changes.  Character Transfers are currently only 600 Funcom Points!

Do I keep the catch-up XP buff from Saga of Blood?

The buff is exclusive to the server, not your character.  When your Saga character is moved to Fury, they will not receive that bonus.

What about my character’s name?

Character names will be transferred from Saga of Blood.  If there is a naming conflict, it will be resolved according to the following, in order:

Characters who lose their name will be provided a temporary name and you will be able to rename them for free the next time you log in with that character.

What about the Saga Quest Rewards?

As you complete stages of the Saga Quest, you’ll get each reward as an additional, separate claim through the shop window after the merge. This includes everything from the vanity gear, pet, and the power gear. These rewards can be used on Crom or Fury on a character of your choosing!

You can claim each reward once per account, so please choose the character wisely.  You cannot claim these rewards on your Saga character.

I still keep the Saga Quest rewards on my Saga character, right?

Yes, your Saga character keeps everything they’ve already earned.  The item claims are an additional reward for playing on Saga of Blood.

Will I be able to complete the Saga Quest after the merge?

The Saga Quest will become unavailable after Saga of Blood closes.

What about my guild?

Guilds on Saga of Blood will be transferred to Fury.  This includes:

Battlekeeps will not transfer to Fury, but you can contact Customer Service to get your materials back.

My guild has the same name as one on Fury. How does that work?

Guild names on Saga of Blood that conflict with guilds on Fury at the time of the transfer will receive a legacy tag appended to their name.

What happens to my Saga character slot?

If your Saga character is at least PVP Level 1 by the time Saga of Blood closes, you keep the free extra character slot.  This means you won’t need to do anything extra after the merge.

I didn’t get to PvP Level 1 before the merge.  What happens then?

Do I get anything for having a Saga character below PvP Level 1, then?

Speaking of which, I’m one of the winners of the end-of-server tournament.  What happens then?

Fame and glory!  If you were one of the winners of the Saga of Blood class dueling tournament, your character name and appearance will be posted on the website and forums for all to honor.  You’ll also keep your special cloak and title for that character.

That should cover most of the topics you’ve asked about.  If there’s anything we missed or anything you have further questions about, head over to the Official Forums and ask there.