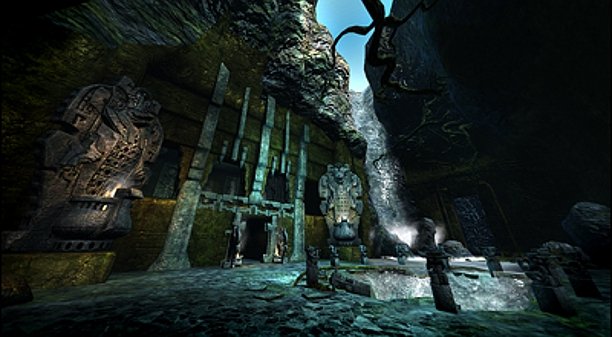 "Fools will run where wise-men fear to tread and yet in this matter I fear we must be as fools. The Picts must be denied access to the blood sorcery of Acheron. Let them be content with their beast-magics and rituals. You must ensure that the past remains buried.”

The prison colony known as Thunder River has been home to many of Aquilonia’s worst criminals. Murderers, rapists and black-hearted rogues have all graced the soil of the island, never knowing that something far darker than stains upon their souls lurked beneath them. The Acheronians called it Xibaluku, this sacred place within the earth. A place of worship and sacrifice; where shadowy figures once writhed in the unearthly ecstasy of blasphemous rituals to unnamed gods.

Now the Picts have found the blood magic of the Acheronians and, like all savages of their kind, they seek to make the power their own. In the dark depths they raise an army of the dead and if they unleash their power upon the earth then darkness and fire shall follow. But allies can be found in the most malevolent of places, and Kar Grun the Exile looks for those who can help him against his brother, Jal Kor Bloodbane. The Picts are divided by the very thing which gives them power; the blood magic. Kar Grun will not give up the old ways, and his brother seeks only power at the cost of his very soul.

Where do the dark paths of Xibaluku lead? None know. The only truth is that the evil of man is only as far away as his reflection…

In an effort to expand the high-end content in Age of Conan: Hyborian Adventures we are now adding a new dungeon called Xibaluku. This instanced, level eighty, single group dungeon will provide players with countless more hours of gameplay by offering a series of new quests, encounters, loot and of course new environments to explore! Xibaluku is currently undergoing testing and will be available in Update 4.

Players wanting to explore the new dungeon will need to head to the Thunder River region. Set in a great system of hallways and caverns in and under an old Acheronian ruin, Xibaluku is now the home of a savage tribe of Picts that is wreaking havoc in Thunder River. As a group you and your allies will need to gain access to Xibaluku (not an easy task at all – first you need to complete the Slaughterhouse Cellar dungeon) and progress through a unique storyline that will bring you deep into the darkest of depths.

This new dungeon will offer additional replay factor through a variety of optional bosses. With eleven separate boss encounters players will find themselves challenged in new and unusual ways as well as finding that their actions in the dungeon will influence the challenge they will face in the final encounter in the dungeon. Some of the encounters will also not be the same every time you play them. With some of the locations offering a selection of different bosses to encounter, to rarer boss spawns throughout the dungeon you will have to keep on your toes to complete the adventure, even on subsequent visits to the sprawling underground ruins. For instance, depending on how fast the player progress through the dungeon, certain bosses might or might not be available. Players will unlock rare bosses depending on how well they progress through the dungeon.

With the boss encounters and game-play the goal in Xibaluku is to make sure the players identify with very different challenges both from each boss they encounter as well as facing dangers from the environment itself. You will have to consider your tactics and strategies very carefully and keep on your toes as these new encounters. Players will need co-ordination and team work to take down all the bosses in this dungeon and complete it.

When designing Xibaluku we wanted to make it an even more interactive experience, and we wanted to bring traps and other gameplay mechanics into the gameplay. We have had a lot of success with the re-design of launch dungeons such as the Black Castle, where we introduced numerous challenges that would make life a bit more difficult for players. Our clever and rather devious developers have concocted several new tactics and tricks for the residents of Xibaluku to employ – and here are some examples:

In one of the boss encounters, the players will need to keep the boss moving at all times. However, at the same time, the players will have to be careful where they step. There is a trap in the area that is also constantly moving, and if the player moves into the trap – well, bad things will happen. This should keep players on their toes!

During battle with one of the first bosses of the dungeon, the boss might actually perform mind-control on you causing you to run into a nearby cell – momentarily losing control of your character. “To your cell, criminal!” he will yell. Once inside the cell the boss utter the words “Surrender your soul” and your character falls to the ground – dead!

Xibaluku is full of new dangers players will have to face. Creatures crawl out of every dark corner of this hellish place, and many of these are brand new encounters that players will face for the first time in Age of Conan. Here are some of the fiends you will face once you are able to put your foot in through the door of the Xibaluku dungeon.

Norach is one of the first bosses you encounter in Xibaluku. This Acheronian jailor and his pet dog, Surberec, share a special bond and separating them will be hard. Norach is also known to imprison adventurers who journey into Xibaluku, and will consume their very soul upon doing so unless the adventurer manages to escape!

This is the demonic, blood-soaked Pict who screams and rages all night from the depths of Xibaluku. This savage Pict is known to hate everyone, and might very well attack both adventurers and other inhabitants of the dungeon. His scream allows him to ignore his pain, making battles with him a challenge. He is also extremely paranoid, causing him to swiftly shift focus in the heat of battle.

Xibaluku is prop full of loot and rewards. While we certainly do not want to spoil the fun for you, we do want to highlight some good stuff for you. You will have to figure out the quality and power of this loot yourself, but here is some to whet your appetite!