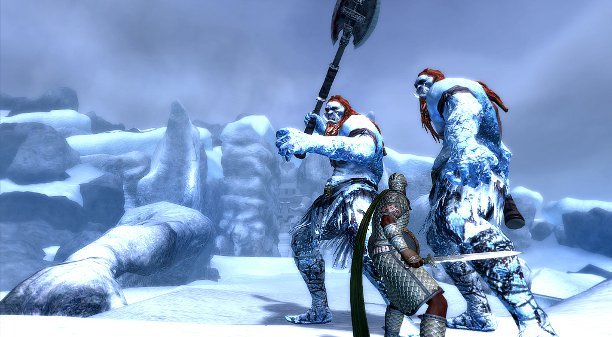 Ymir’s Pass introduces hours upon hours of adventure into Age of Conan. Let’s take a look at some of the locations you will explore, characters you will meet and quests that you will embark on in this short-and-quick guide to Ymir’s Pass.

“It was a gloomy land that seemed to hold
All winds and clouds and dreams that shun the sun,
With bare boughs rattling in the lonesome winds,
And the dark woodlands brooding over all,
Not even lightened by the rare dim sun
Which made squat shadows out of men; they called it
Cimmeria, land of Darkness and deep Night.”

If a man wishes to travel the distance from Cimmeria to the southern kingdoms, the fastest route is through Ymir’s Pass. It is a journey that captures the raw beauty of the northern lands, from the ice-tipped peaks which shadow the land to the snow-covered planes that lead further south through rocky valleys. Once through the mountains, the land slopes downward to the rocky expanses of the Border Kingdoms and the great plains of Nemedia beyond.

But would-be travelers must be cautious. Not all is well in Ymir’s Pass and the wind that sweeps down the mountains and howls across the plains carries with it the stench of war and death. It begins with the self proclaimed bandit-king, Atzel. Thoth-Amon returned Atzel to life after his death at the hands of Conan. In return Atzel swore to help the sorcerer carry out his plans.

Those plans are beginning to come to fruition.

Atzel’s men have moved into Ymir’s Pass, driving back Clan Maugh, the Cimmerians who make their home in the region. The Clan makes the bandits pay dearly for every swathe of land that they take, but life is cheap in the eyes of Atzel and even cheaper in the eyes of Thoth-Amon. The leader of Clan Maugh, Caden Chieftain, has decreed that his people will give no more ground. They will retake the land of their forefathers, or die in the attempt.

But Caden has other worries. His headstrong daughter, Ula, has gone missing in the wake of the attack and he doesn’t dare ask any members of the clan to risk their lives searching for her in enemy territory.

The Battle of the Frost gate

Further north, a skirmish has taken place between Atzel’s men and a band of Aesir travelers. In the region known as the Frost gate, a great battle was fought, with great losses on both sides. Little is known as to the fate of the Aesir. If they do still live, they are deep in enemy territory and their relations with the local Cimmerian tribe are strained at best. But for now, the corpses of their fallen comrades lie tumbled in the snow.

Those who travel will shift uneasily as they remember the legend of Atali, the Frost Giant’s Daughter. It is said that she comes to the fields of the dead she comes and walks among the dead, her naked body gleaming like ivory. She lures men from stricken fields into the wastelands to be slain by her brothers the ice-giants, who lay men’s red hearts smoking on Ymir’s board.

In the southern swamps of the region, which the local clan has long avoided due to its dark reputation, something is stirring. Three ancient ghosts wander the landscape, wearing the crowns of long dead Acheron. And where they wander, they drive the denizens of the swamp before them, forcing the normally timid swamp demons to migrate from their beloved swamps.

Whence came these kings of Acheron? The answer lies in the ruins to the east.

The ruins which dominate the southeastern portion of the region are those of Karutonia, once the northern-most city of Acheron. Karutonia was a great city, ruled jointly by three kings. The frontier city held back the barbarian hordes and thousands of barbarian slaves were sacrificed in their great amphitheatre.

But this enraged the barbarian hordes. They stormed the city and razed it. It was the beginning of the fall of the Acheronian Empire. Today, the ruins are full of Black Ring Sorcerers and their allies, searching the ruins for the relics of Acheron. It is rumored that they have opened the way into the Amphitheatre of Karutonia and they feed upon the dark legacy of the sacrifices that once occurred there.

The Amphitheatre, once the site of such horrible sacrifices, now serves as a nexus for the evil in Ymir’s Pass. Black Ring member’s come and go freely, and a few of Thoth-Amon’s greatest allies remain in the Amphitheatre.

The Dimensionalist dwells in the ruins. With the flick of his wrist, this master sorcerer can summon an entire army from the depths of the void. His creations are loyal and incredibly lethal. The Abyssal Keeper cages the spirits that he raises from the darkness. He raises the souls of the animals that once fought for sport in the amphitheatre, and trains them to do his bidding.