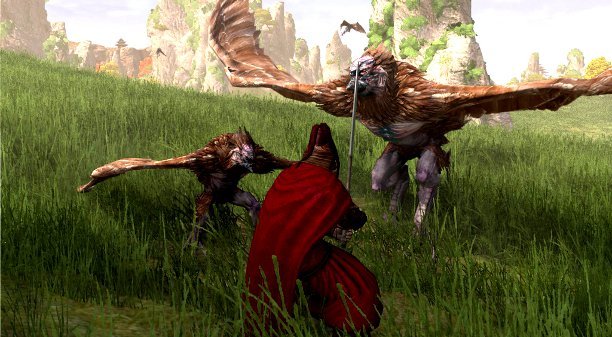 “There were a series of small, ugly battles, as the noblemen tried to carve themselves larger estates at the expense of their neighbors. The lands of Chosain Province became a warzone as the northern city of Gun Hai and the southern city of Gun Xiu became embroiled in a mighty battle. Shaulun, once a city of scholars, now became a staging area for mercenaries – with both sides in the larger conflict attempting to recruit men from the city. It became neutral territory, where mercenaries could spend their war wages on whoring and drinking. The scholars who once ruled the city now beg in the streets.” - Unknown scholar

The Chosain Province is one of many new world regions being added to Age of Conan in the upcoming expansion pack Rise of the Godslayer. Here we take a look at what players can expect when heading into this strange new land, influenced by the culture, people and geography of the East.

The Chosain Province, situated in the land of Khitai and inspired by eastern, ancient culture, in all its glory is a land of troubled beauty. Volcanic plugs, rice fields and rolling hills make it one of the most open and picturesque areas in Age of Conan and you can even see into other regions from its hills. This world, beautiful as it is, is at odds with the cruelty of men, which has left some of the landscape in ruins. Burnt ground and the wreckage of siege engines and war have scarred a part of the province, perhaps forever.

Rivaling the croplands to the north in both beauty and sustainability, Chosain is most definitely scarred by the ongoing battles in the region and lacks the development needed to make it the prosperous district it once was. Its cities are increasingly populated with mercenaries and the culture of violence and war that accompanies them.  Chosain will be either the third or fourth region players will see, depending on actions taken earlier in the game. Conan himself is well known in the province, although perhaps not for the right reasons. 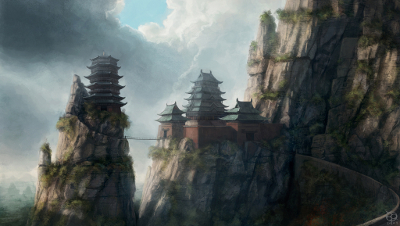 “In designing Chosain, we wanted to focus on an open landscape, as well as providing our players with a near seamless region that even lets you look into other playable regions from its border,” says Joel Bylos, lead designer on the Rise of the Godslayer expansion. “The uniqueness of the playfield combined with easy travel to other playfields made for some interesting design challenges, and we’ve done our absolute best to meet our players’ high expectations.”

Chosain is a land full of diversity. Players will move through lush areas with rolling hills, volcanic remains and war-ravaged lands, and have the opportunity to take part in the massive battles between the warring factions in wide open terrain. Regardless of faction choice, players will experience a wide range of quests and story lines, ranging from simple delivery quests to complex and deadly assassinations.

In one quest, the player has to fight his way through a house full of thugs to decapitate their leader, only to discover other hostile factions out on the same mission. Another quest line will see the player scavenge for the rare Foxtail Lily herb, in order to poison a demon without it smelling the scent of the poisonous Lotus plant burning. These are only two of the massive number of new quests in the expansion.

On the brink of war

"You can see smell the smoke, even if you can’t see it from here. I don’t know what is burning…I don’t need to. Take my advice and don’t go that way, outlander. In these dark times smoke means one thing and one thing only. Trouble." - Dan-zu, former soldier.

There are two major cities in Chosain, Gun Hai to the north, and Gun Xiu in the south. Ruthlessly ruled by the warlords Yun Rau and Min Cho and more reliant on mercenaries than ever, the ongoing conflict is made even more volatile by invisible, outside forces with a stake in the province. Suddenly any fool who could wield a blade was in the province, looking to join one of the sides in the conflict. Promises of jade, land and titles has drawn warriors from all walks of life and all corners of the world.

The once beautiful city of Shaulun became a recruiting ground for mercenary troops and the Scholars who had once dwelt there studying the moon goddess, Cheng-ho, were forced into the streets and Gun Hai’s service. In the south, Tamarin’s Tigers, a mercenary company with a dark reputation have sided with Gun Xui and both warlords know a final battle is unavoidable. 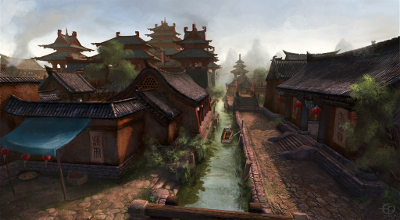 There is a huge, open battlefield in Chosain with opposing sides fighting an ongoing battle against each other. Players can go here and choose to get involved, fighting for either side of the conflict.

“The story of the expansion is the story of an empire crumbling into chaos,” says Bylos. “Chosain Province is a region full of war and humanity at its worst, but on the eastern edge of the playfield the once proud imperial highway still leads east, to the heart of the empire. The road is choked with vines and weeds and none dare travel that way anymore. Why? Because it leads into the heart of the darkness.”

Chosain has a rich bestiary, consisting of anything from the rock-solid Kappa to the flying Children of Jhil. There is also a prosperous and diverse animal life here, and even the docile water buffalo can turn aggressive if it feels its young are under threat. Players will need to use cunning to hunt some of these animals; a group effort can result in a flock of otherwise aggressive Firebirds literally sticking their heads in the sand after seeing their companions fall to well aimed arrows, making for easy prey.

The Kappa is a creature of the wetlands, and not much is known about its origins. A prehistoric beast, or perhaps a normal creature warped by dark magic, one thing is certain; Kappa are strong, aggressive and well equipped to defend themselves. Due to the rocklike appearance of their outer shell, Kappa are known for hiding in tall swamp-grass to ambush any potential threat. Controlling the swamp, the Kappa also receives help from other swamp creatures should it feel threatened. Kappa lay eggs and their nests are often sought after by nobleman as an exotic dish.

Known as Crowmen, these flying creatures refer to themselves as the Children of Jhil, believing that they were created by the god Jhil and given intelligence by the god Jhebbal Sag. The birdmen dwell in the caves and volcanic plugs of Chosain, and are feared by the local population. Laying their eggs in high places, the Crowmen will fiercely defend their nesting grounds and attack anyone who attempts to enter into their nesting areas in search of shiny baubles.

The souls of travelers who die in the swamps and marshes of Khitai do not always find their way to the underworld. Instead they become trapped in this plane of existence as a wisp, better known as Ghostfire. They act as malevolent lights that seek to draw unwise travelers to their death. Ghostfires tend to flee from fights, drawing their prey deeper and deeper into the marshes and relying on the stronger denizens of those dark places to kill their pursuers. The souls of a Ghostfire's victims become its thralls in death, forced to do the will of their ghostly master, who uses them to ambush even more travelers and increase their collection of lost souls.