Share on:
Home
News
Rise of the Godslayer - Mounts 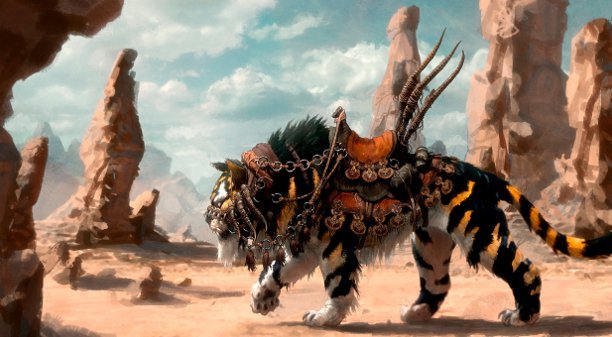 Rise of the Godslayer - Mounts

Rise of the Godslayer introduces some new mounts to the Age of Conan universe. Funcom is proud to announce the fearsome wolf mount, in addition to the previously revealed tiger mount as well as the Hyrkanian horse. The wolf and tiger mount follow an all new series of epic quests where the player will not simply be given the mount – they must capture it as a cub and hand raise it in order to one day ride these magnificent beasts. The quests to tame these beasts will see the players traverse several regions to train the cub and gather supplies.

“Some of the thinking behind this new system is that players will create a connection with their new mount,” says Joel Bylos, Lead Designer on the Rise of the Godslayer expansion. “Raising the mount from a cub and teaching it how to hunt, track and fight is a long process, and by the time players have proven themselves worthy of riding it a bond has been created. When you see players riding a tiger or a wolf you’ll know that it is not just a right to do so, it’s an earned privilege.”

”They say that dogs are man’s best friend, but wolves? Wolves are stand-offish and they don’t like humans much. We smell.” - Wolves of the Steppes Raider

Eventually being able to ride a wolf into battle will not be an easy task, and the player must go through several quests where the wolf will grow with each quest completed. The types of wolves range from a small cub that merely follows the player around, to a fully grown wolf, capable of carrying its master and inflict pain on those standing in its way.

The only way to get a wolf is to get it young and separate it from the pack. This will prove that you are worthy to be the pack leader – if you die then you were not strong enough to replace the pack leader. Finding the pack is the first challenge –killing them is the second. At first, the wolf is too small to be much help to the player. The wolf needs to learn to hunt and kill prey. This will take some time and effort.

A wolf must also be able to scent their prey and use that scent to determine between friend and foe. The player must teach their wolf to understand the different scents of the world and to teach them the smells. The wolf must then be tested to ensure that it knows the difference.

The wolf is not a creature inclined to carry a rider; indeed it is far more likely to cast off the player and use them as a meal. But if the player wishes to ride the wolf, they must make a harness which is strong enough to hold and direct the wolf. In time, it will become used to their efforts.

The Wolf mount comes with two special abilities – firstly to be able to scent nearby enemies and warn their master of impending stealth attacks. Secondly to be able to dig for buried treasures in the landscapes of Khitai.

The wolf mount has the longest endurance of any mount in the game, it can be used to sprint for very long periods of time.

”Do you think that these beasts simply roll over and let you scratch them on the belly? This isn’t like riding horse – that is unless you’ve ever heard of a horse with claws as long as your forearm and teeth that would give a dragon nightmares.”  - Tamarin’s Tigers Mercenary

The tiger, known to the Vendhyans as the Vaaghasan,  is closely linked to the Tamarin’s Tigers faction. To be eligible to even attempt to ride a tiger, the player must first become a member of Tamarin’s Tigers.

The first task that the player must undertake is to find a worthy companion. This is both a rite to prove oneself as one of Tamarin’s men, and also the rite in which the player gains their very own tiger. Players must first find a tiger den. They must then remove all of their armour and weapons and kill the Tigress using nothing but their bare hands. The reward for this quest is a tiger cub that will follow the player.

Now that the player has their companion, they will need to grow them into the predator they were always meant to be. This will take some time and effort on behalf of the player. They must start with small prey and work their way up to some of the toughest beasts that can still be eaten.

Soon, the cub has grown into an awkward adolescent. It knows how to eat and even how to use its teeth to kill, but it knows nothing of subtlety. Now it must learn how to stalk like a beast in the woods. In Vendhya, the Tamarin’s Tigers train their animals using some of the spirits that they summon from their own mythology. But here… there is only one choice. The Vendhyans have heard of a white tiger spirit, revered by the Khitan as the very epitome of grace and virtue. The player must speak with some local priests to learn how to summon the animal spirit. Once the spirit is summoned, the player and their tiger pet must follow it on the hunt, and remain undetected.

Tamarin judges that the man and the vaaghasan are as one. He will be the judge to see if the bond is now strong enough that the vaaghasan will consent to let them ride. But first, there is the matter of the saddle. The saddle of a Tiger is not something that can be purchased – it must be assembled by the one who wishes to ride.

Once a player has fully trained their tiger mount, they will be able to use it to stealth around playfields without being seen.

The vaaghasan is the mount with the fastest sprint speed in the game. This emulates the explosive power of the tiger over short distances.